The Chandler and Price platen printing press was donated to Carleton University in 1988 by Department of English Professor Michael Thompson. This press is an example of the basic letterpress technology that was used for the first 500 years of printing (ca. 1450–1950).

This printing press was one of several models developed from the George Phineas Gordon design of the 1850s which turned the horizontal printing surface of Gutenberg’s old flatbed screw press into a vertical plane. The new design enabled a significant increase in the number of impressions per hour (up to 1500), exceeded only by that of the rotary press.

Platen presses were manufactured in great numbers and became the standard workhorse of smaller printing shops across the continent. Chandler and Price built around 100000 presses of various models and sizes between the 1880s and 1960s. Some are still in use today.

The Library press on display at the entrance to the Library has an interesting history. It was manufactured in Cleveland, Ohio, in 1916 and spent its first half-century printing the Pembroke Observer newspaper. In the late 1960s the press was acquired by Ladysmith Press, a Quebec poetry publishing house. In 1974 Professor Thompson bought the press, stored it for a number of years in a barn near Kemptville, and then moved it to a storeroom in the base of the Dunton Tower. It was then restored by a group of volunteers and used to print literature, including Grey Matters: the Peace Anthology (1985), on display near the press. More information is available in This week at Carleton articles on the arrival of the press, and on its move to Dunton Tower.

In 1988 the press was moved out of its storeroom in the Dunton Tower to make way for a computer! It remained in an off-campus storage facility until it could be housed and displayed in the Library. Completion of the extension in 1991 enabled Library staff to move the press out of storage and once again return it to working order.

The press was restored yet again in 1991 by another group of volunteers, including Jeremy Palin (then Head of Special Collections and Archives) and Martin Foss (then Associate Librarian and later University Librarian). Ray Luoma, a Carleton student in the 1970s who was instrumental in the press’s earlier restoration, guided the project. Danny Flowers, former Shop Technician in the School of Architecture and a library employee for many years, built the oak and pine base. More information can be found in articles from the time in Today at Carleton and Library News.

The press was moved to the entrance of the library to mark the opening of the newly renovated MacOdrum Library on December 5, 2013. The press had its motor removed and is not expected to be used for any printing activities. As an alternative to running the press, as part of the opening ceremonies the Library ran a playlist of Youtube videos showing similar platen presses in action. The press now sits near the photocopiers on the main floor.

History of the Library’s Printing Press

Letter from Professor Michael Thompson to Jeremy Palin, Head of Special Collections and Archives, February 21, 1991 describing his knowledge of the background of the Chandler and Price printing press. Hand corrections to typed script by Professor Thompson. 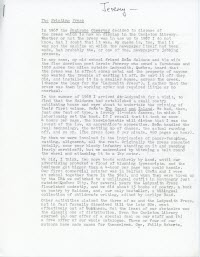 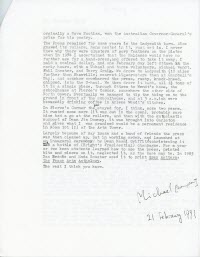 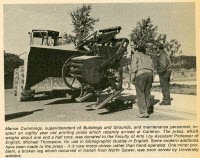 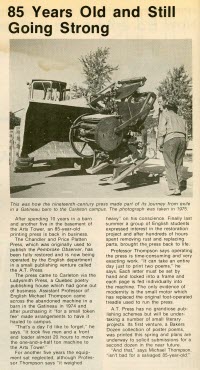 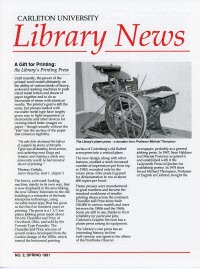 Miseo Dean completed both her undergraduate degree and her master’s degree in the early 1980’s at Carleton University. She also taught at Carleton as a sessional in the Department of English Language and Literature while working on her PhD dissertation at Queen’s University. After a post-doctoral appointment at the University of Ottawa, Miseo moved to Victoria in 1989 where she still teaches in the Department of English at the University of Victoria.

I have great memories of Carleton’s English department — Robin Mathews, Alan MacLay, Parker Duchemin, Jack Healey, and Lindsay Mann were all great supporters of my work and instrumental in encouraging me to continue to the PhD. Not very many women in the department in those days, but those guys were great to me.

A group of fourth year English students were working on the press -- Ray Luoma was the one who worked on getting it running, because he was much more mechanical than the rest of us. I remember he had to have a piece machined -- one of the metal arms that held the paper to the plate -- and he set up a 1 1/2 horsepower engine with a belt attached to the flywheel to make it go. This wasn't the way it was supposed to be powered, but he had the idea and unsurprisingly, we didn't have access to steam (jumping up and down on the big lever at the front was fun, it wasn’t really a practical way to print anything). The press was located in a storeroom in the basement of what you call Dunton Tower, that was known as the Arts Tower in my day. If you go round the corner from the elevators in the basement -- not toward the tunnels, but the opposite direction -- there is a storeroom on your left.” I'm having trouble remembering who else was involved -- Ray's girlfriend Charlotte — there were others, but the names are gone.

We learned to set up type from books, and by doing. It was very difficult and time consuming — you have to set each letter one at a time, upside-down and backwards. When we finished a page of type, we laid it out on table and centred it in the middle of a metal frame, filling in the space between the type and the frame with wooden shims tightened with quoins. The whole thing was held together by tension, and it had to be very exact, or the type would end up in a jumble on the floor when you picked up the frame. We weren't very good at "packing” the platen so we always had the risk of too much pressure making the print cut through the paper -- we ended up printing mainly on heavy stock, because it was easier to make an acceptable product. So we decided to print a series of poetry broadsheets -- the fact that most of us wrote poetry was of course a factor. We printed poems, on one side of heavy coloured paper, with our name "AT Press" at the top, each of them numbered. I can't remember exactly how many we did -- eight or nine? Some were by "community" people as well -- we knew off-campus poets associated with the Tree reading series and Poetry Ottawa and Sparks Magazine and the SAW gallery, and we did some of theirs as well. We also printed a promotional notice for one of Ben Jones’ courses.

Michael Thompson was the faculty member who arranged the donation and went up the valley to pick it up -- he gave us access to the press, and helped us out with money for supplies like paper and ink, and permissions-- poor old Michael, he died in the early 90s of cancer. He was a real mentor to us.