Statistics Canada Census and National Household Survey (2011 only) data is provided in many different geographies and it can be tricky to figure out which one you need to look at. This census help guide should help you out. If you're still confused or have any questions, please email us at GIS@carleton.ca.

Statistics Canada collects data from Canadians via the Census and the most recent complete data is for 2016 although 2021 Census data is being released throughout 2022. To analyze and present the data, Statistics Canada divides the country into over a dozen different geographies from entire provinces to a city block. The table below lists the geographies (linking to their definition from Statistics Canada) and each geography's abbreviation, population minimum if applicable, if that geography completely covers Canada, and how many are in Canada.

The links in the table are from this Illustrated Glossary from Statistics Canada or Dictionary, Census of Population 2021. 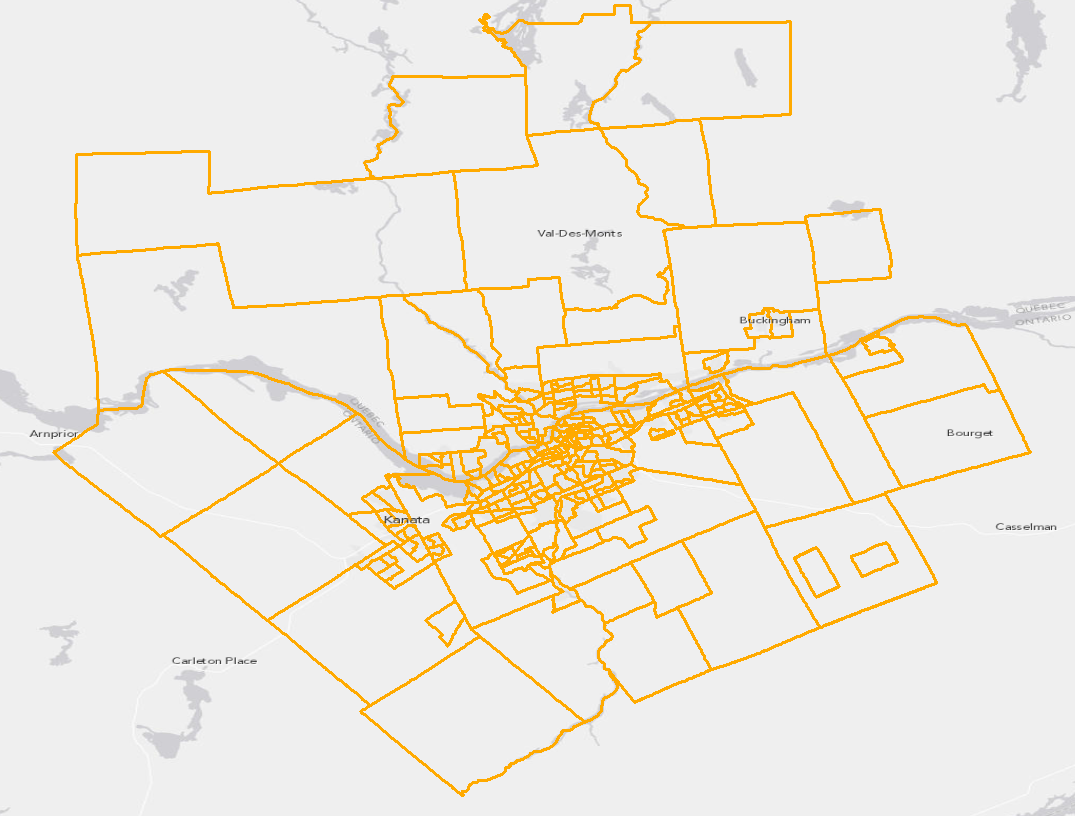 Not every census geography fits perfectly inside other geographies, however. CMAs don't fill every corner of each province or territory, for example, as they are only urban areas. This hierarchy of standard geographic areas (2021) from Statistics Canada indicates which geographies fit within which others. As an example, DAs (dissemination areas) fit within both CSDs and CTs, which is shown by DAs being located below both CSDs and CTs and connected with a solid line. 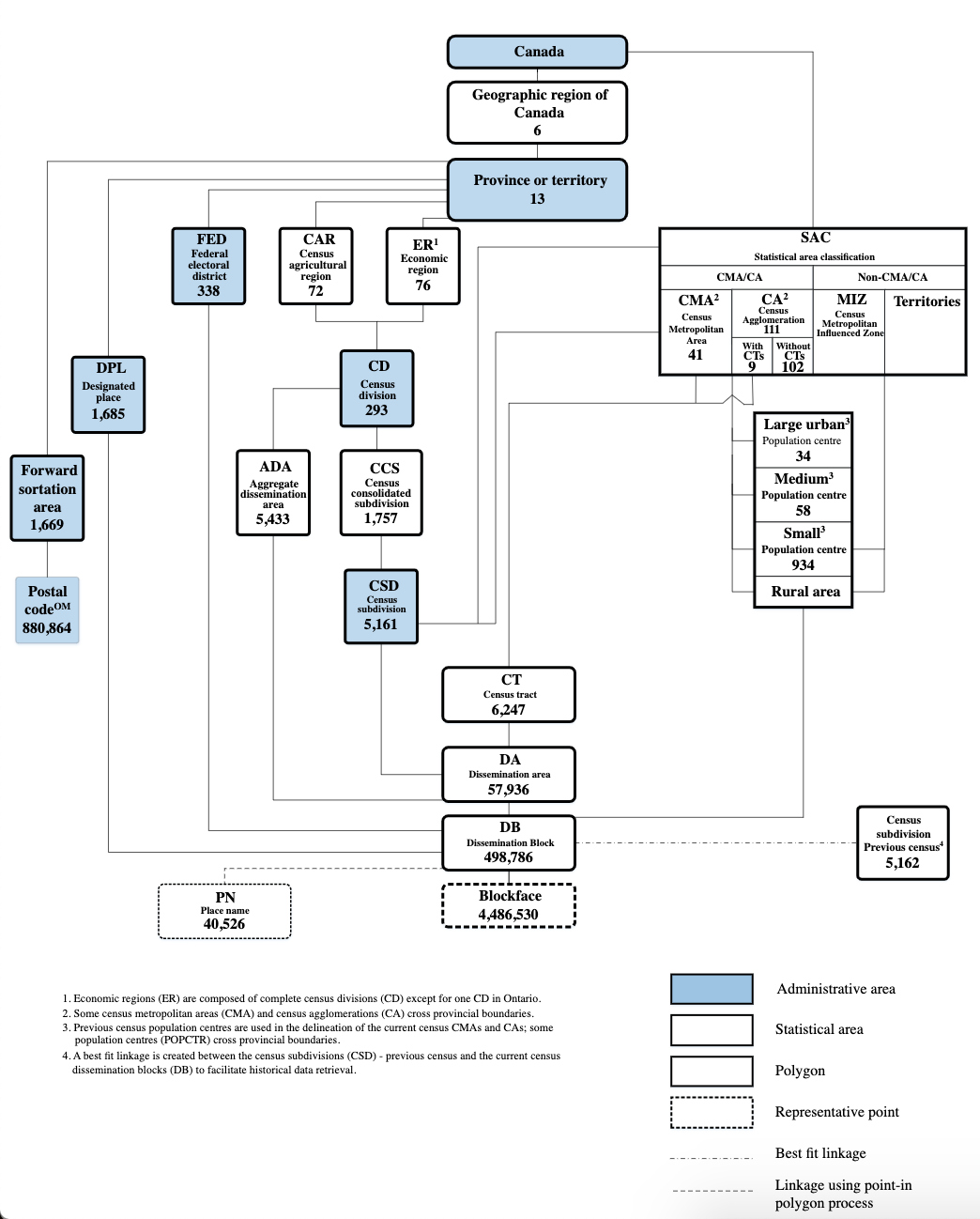 That depends entirely on what you want to look at! Consulting the table in the 'What are census geograhies?' section on this page may help, as might looking at the Statistics Canada geographies hierarchy just above. Some commonly used census geographies are shown below, from large to small.

Just what it sounds like: all 13 Canadian provinces and territories. 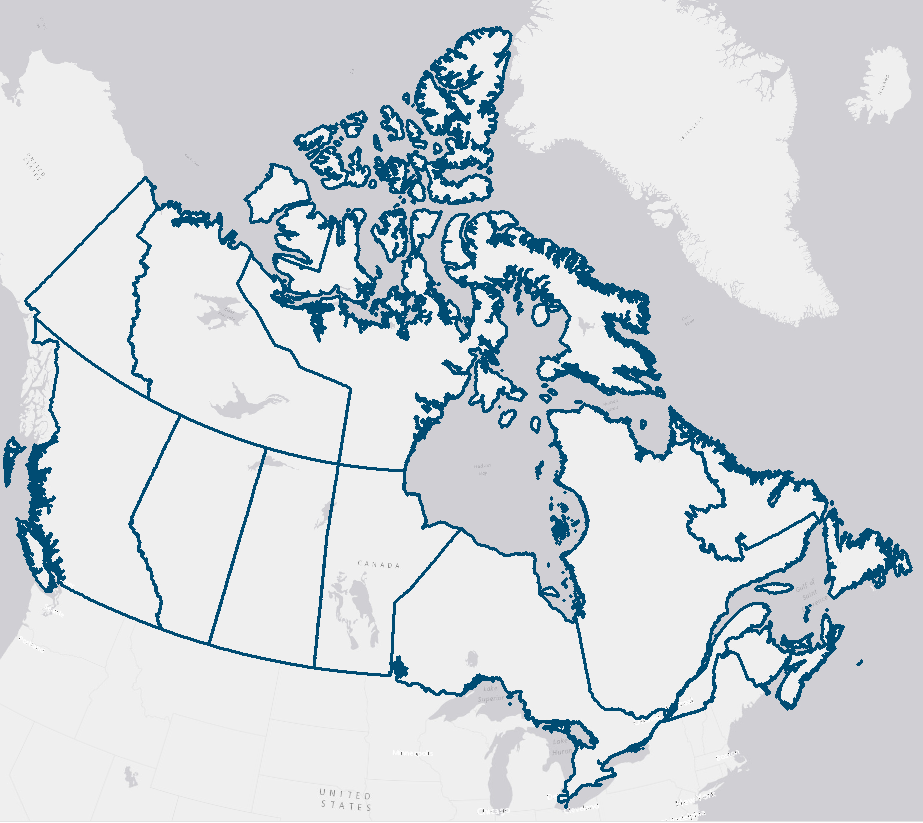 338 Federal Electoral Districts (FEDs) cover all of Canada and can be useful when looking at the whole country in smaller pieces than provinces and territories, but still are a reasonable number to deal with. Each FED is an area represented by one Member of Parliament. 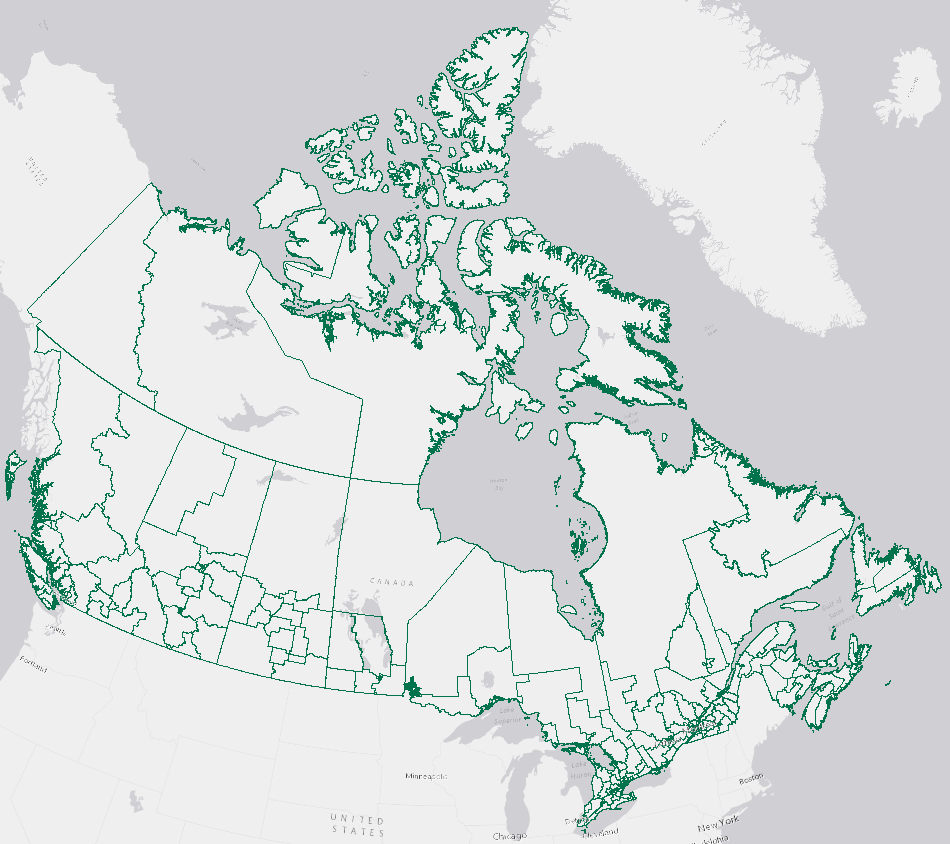 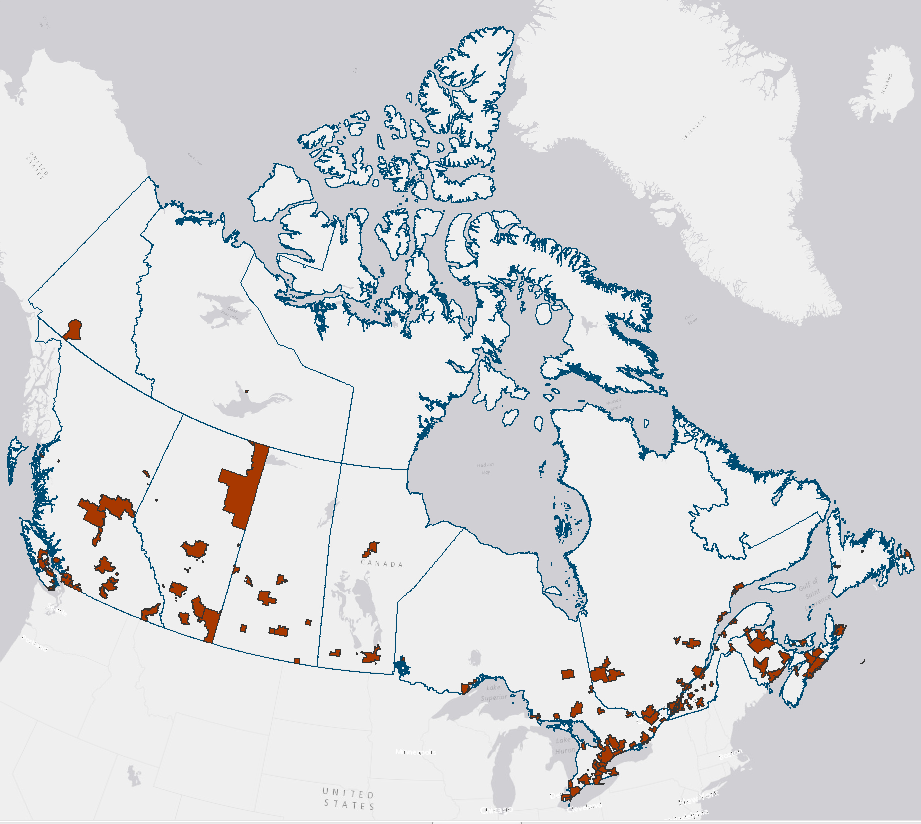 Comparing neighbourhoods in a city or town usually involves looking at census tracts (CTs) as each CT has a population of 2,500 - 8,000. For example, the Glebe neighbourhood in Ottawa is covered by 3 CTs out of the 271 CTs in Ottawa-Gatineau. It's worth noting that CTs are roughly neighbourhood-sized but do not reflect what people who live in a city would describe as a city neighbourhood. In other words, there is no single CT that has the same boundaries as The Glebe, or Hintonburg, or Sandy Hill in Ottawa. 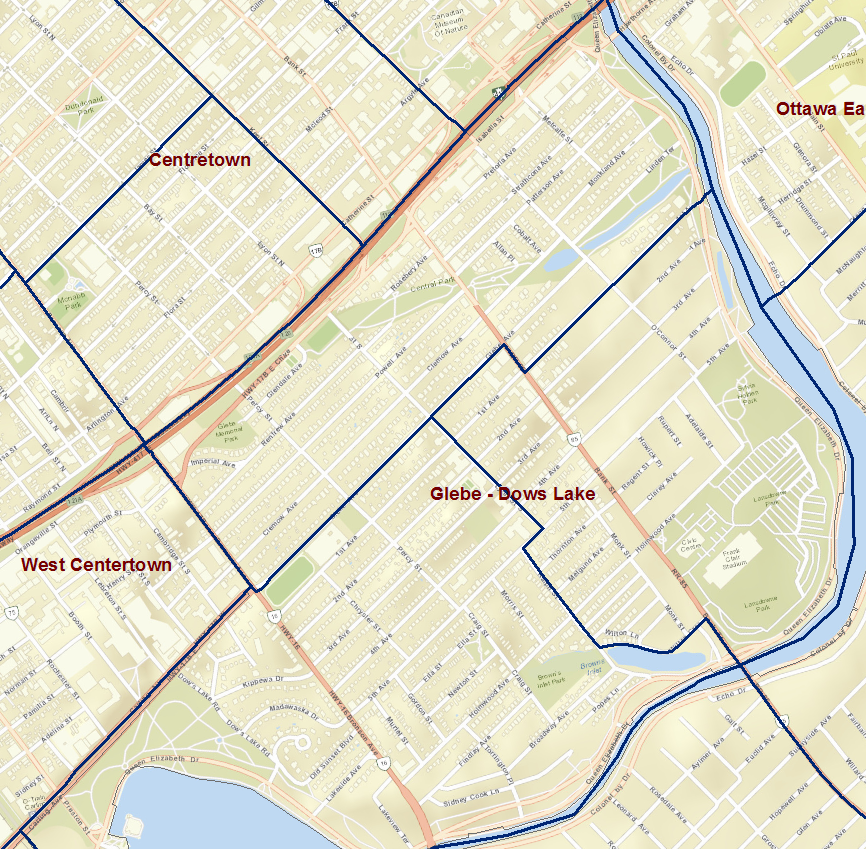 Dissemination areas (DAs) fit within CTs and are the smallest geography for which we have data. Using the Glebe example from above, the CT 0016.00 in the Glebe contains 7 DAs. 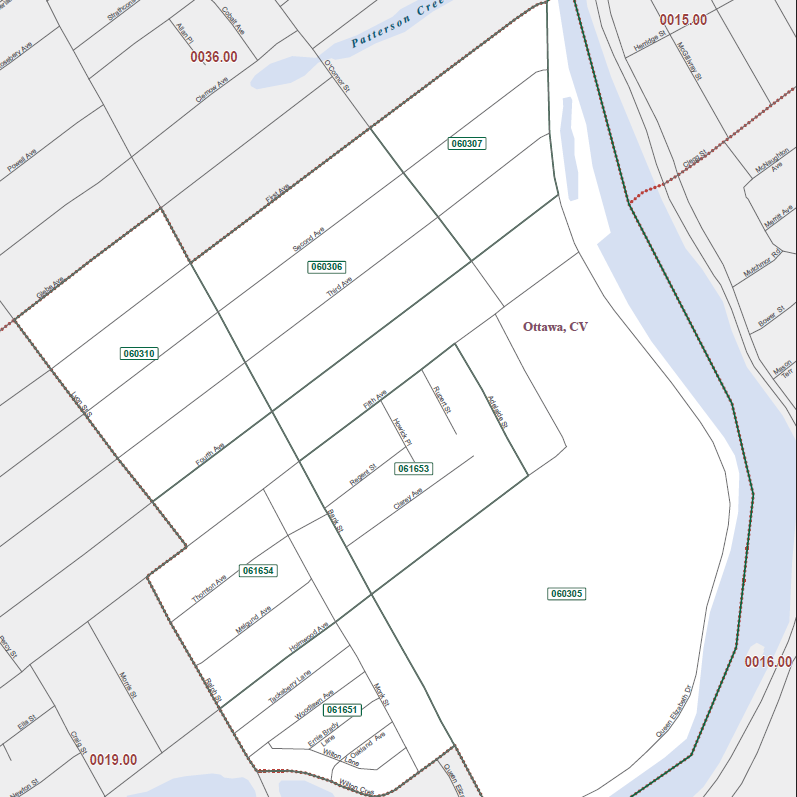 Census geography shapefiles for all of Canada are accessible from both Scholars GeoPortal and Statistics Canada directly for 2001, 2006, 2011, 2016 and 2021.

If you would like census geography shapefiles for Ottawa-Gatineau only, we have those available for direct download (you'll need to be a Carleton student, faculty or staff to access them).

To download the data and map it in ArcMap, we have step-by-step help guides that take you through the process:

If you have any further questions, do not hesitate to contact us via email at GIS@carleton.ca.