What is the PCCF?

Census data do not include postal codes. Therefore, if you have data with postal codes which you want to link to rich data from the Census, the Postal Code Conversion File (PCCF) is probably the tool for you!

New versions of the PCCF are released with each census and aligned with new census geographic areas. Limitations and usage of the PCCF can be explored in the

For even more information about the PCCF series, review this presentation:

As well as this Getting Started Guide.

More things to note regarding the updated PCCF and PCFRF Files:

Postal codes retired before January 1, 2016 are included in a separate file available with the PCCF. The retired PCCF is now being released quarterly so it will be included in each release (where as in the past it was only released every 5 years). The record layout is the same as the PCCF so they share the same reference guide (available above).

The September 2022 update of the Postal Codes by Federal Ridings File (PCFRF) (2013 Representation Order) is now also available. This product, a subset of the PCCF, provides a link between the six-character postal code and Canada's federal electoral districts (commonly known as federal ridings). The "unique link" variable indicates if the postal code is linked to one or more federal electoral districts (FEDs). When the postal code is linked to more than one FED, the "weight" variable estimates the proportion of the population of the postal code that resides within each FED. Learn more by exploring the

The Postal Code Conversion File Plus (PCCF+) is a SAS control program and set of associated datasets derived from the Postal Code Conversion File (PCCF), a Postal Code population weight file, the Geographic Attribute File, Health Region boundary files, and other supplementary data. PCCF+ automatically assigns a range of Statistics Canada’s standard geographic areas and other geographic identifiers based on Postal Codes. The PCCF+ differs from the PCCF in that it uses population-weighted random allocation for Postal Codes that link to more than one geographic area. It also includes options for institutional postal codes and procedures to link partial codes to geographic identifiers where possible.

Note: The latest issue of this publication was the Postal Code Conversion File Plus (PCCF+), Version 7E based on the 2016 census. Although version 7E of the PCCF+ is still based on 2016 census geography, the postal code reference data includes postal codes up to November 2021 and the output includes the 2021 dissemination area (DA) based on a released intercensal correspondence file. The residential flag (ResFlag) and institutional flag (InstFlag) have been updated, as have the air stage offices (up until January 2022).

There are situations where a postal code can span over multiple census geographies.

To learn more about PCCF data, visit the <odesi> repository by going to our main page and clicking on <odesi> website:

Click ‘Browse’ in the top right-hand corner and click through the Geography>Canada>PCCF tabs on the left-hand side. 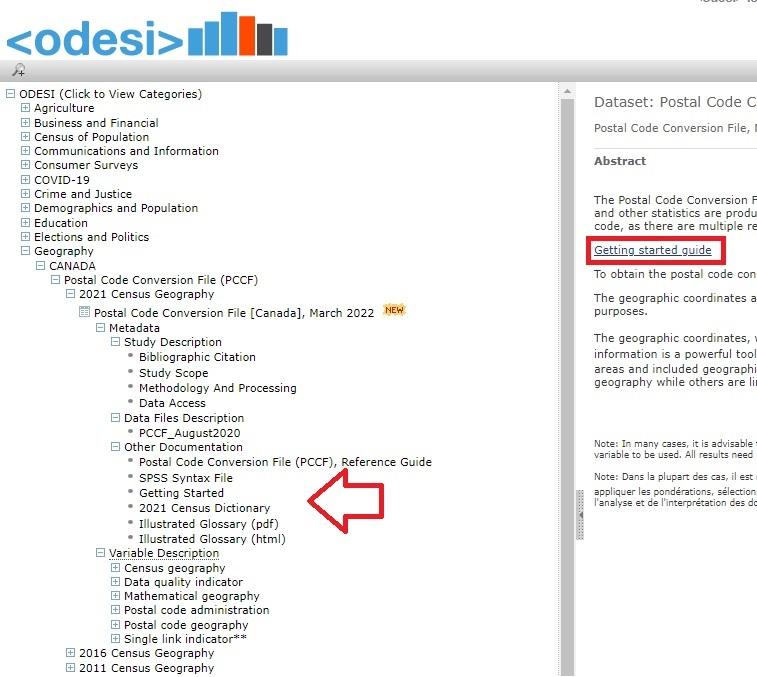 Explore the documentation to learn more about the PCCF!

Also, check out the following resources: